An All Star Experience 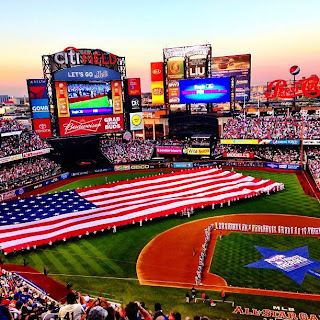 The 2013 Major League Baseball All Star Game might have been the most boring game I've ever attended. Zero hitting. Minimal run scoring. Even the runs that were scored were on lame sac flies or fielder's choice plays. It was also one of the most amazing sports experiences I've ever seen.

This was my first All Star Game. I've watched every All Start for the last 28 years on television and when the opportunity came to see it first hand in my favorite team's stadium I had to do it. Price gouging aside, this is truly a once in a lifetime experience.

Not only was this my first All Star Game, it was the first All Star Game my son has been to. In fact, yesterday was the first baseball game he's ever been to in person. I will now accept my Father of the Year trophy. My son is 8 years old. He's not a huge baseball fan. He knows daddy loves the Mets. He knows David Wright and every so often asks where is Jose Reyes. I got him a Matt Harvey shirt and he thinks Kevin James on the jumbotron is fat, foolish and pretty hilarious. I didn't expect him to appreciate the significance of this game now, but I know he will down the road.

Explaining to my son what the All Star Game exactly is was interesting. He kept asking why aren't there more Mets players playing if it's in their stadium? He's starting to learn the game of baseball and a steady flow of junk food being passed his way helped him endure 9 innings of lackluster play from the game's top players.

But the sentimental father/son moments aside, the All Star Game being at Citi Field for a Mets Lifer was remarkable. Mets fans have lacked a packed house brimming with energy for quite a few years. What was interesting was just how few Yankees fans were in the building. This truly was a night for Mets fans.

The ovation for Wright and Harvey during the starting the lineups was raucous. David Wright may have worked harder the last two days than he will the remainder of the season. The guy did every interview. He was in almost every promo on the scoreboard. He was a PR machine for the Mets and after seeing him do all that I came to realize that it's really hard not to like David Wright. Is there a more clean cut, likeable, quality player in the majors than Wright? I'm not sure there is.

Then you have Harvey. The flashbacks to the hopes and dreams of Doc Gooden come flooding back every time I see Harvey take the mound. When he had 2 outs and 2 strikes in the first inning, the "Harvey! Harvey" chants started up organically as Citi Field just wanted to explode with a strikeout. I can't wait for more of those types of moments in regular season and hopefully postseason games in the future.

And Harvey plunking Cano was a bit entertaining as well.

Even as a Mets fan, I could appreciate the moment that was Mariano Rivera's final All Star Game. How could you not applaud this guy who might be the best pitcher we'll ever see. Rivera standing alone on the mound for a good 3 minutes amongst cheers and revelry was a moment I'll never forget.

So the National League lost and won't have home field advantage in the World Series. And yes the game was ridiculously boring for the most part. It didn't matter. This was an amazing experience, especially for Mets fans. If I liked the Dodgers or the Orioles or even the Reds, I probably would have walked away without that much of an impression. But for Mets fans, the All Star Game might very well have been the beginning of a new chapter. Changes are happening. An inkling of that was felt last night and I can't wait for what's to come.
Posted by Unknown at 9:51 AM