What Are the Mets Odds?

If you look at the MLB Odds on BetUs.com, the answer is not good. BetUs.com has the Mets equal to the Washington Nationals as far as their chances to win the NL East. If you were wondering, yes that puts them finishing last in the division.

The site doesn't have odds for Wild Card placement, but it does have a ton off odds figures for the upcoming 2011 MLB season including individual batting categories, the chances of potential match-ups in the playoffs and even the chances of winning regular season series against specific teams.

At the very least, it's an entertaining look, but can be depressing when you see quantitative proof at how low the expectations are for the 2011 Mets.
Posted by Unknown at 3:23 PM 1 comment:

Terry Collins and the Fundamentals

While the title of this post sounds more like a 1950's Motown group, it's a simple change that could reap future rewards for the New York Mets. Terry Collins, from my early observations, is a cross between George Carlin and the caricature of George Steinbrenner on Seinfeld as far as his interview style, but as a coach he seems to be just what the Mets needed.

Fundamental baseball has long been absent from Queens. Willie Randolph used to talk about it. Jerry Manuel would mumble about it. But Terry Collins appears to be ready to do something about it.

The Mets need a guy who can focus on fundamental baseball. Everything from errors to situational batting and even defensive awareness are pitfalls that have doomed the Mets the last few seasons.

Collins made one comment that really drove this home for me. Collins alluded to the fact that the Mets starting rotation really doesn't have strikeout pitchers, and that's going to force Collins to make sure that the team on the field is exceptionally adept at the fundamentals as more balls we'll be hit in play than with a rotation like the Phillies.

You don't need to be an astrophysicist to come to that conclusion, but it's the type of think that we haven't seen from a manager in quite some time. All Mets fans can ask for from this team is that they play solid baseball. I don't expect them to win 100 games or score a ton of runs, but watching sound fundamental baseball would be a nice change of pace.

Terry Collins is instituting change. It's subtle and small, but change nonetheless.
Posted by Unknown at 4:13 PM 3 comments: 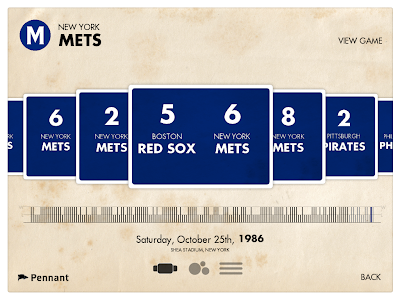 A friend told me about the Pennant app for iPad today and I just had to share it. It is a history book of every single action that took place in baseball from 1950's to the present. 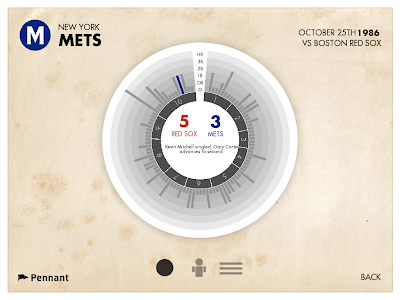 The app is an independent project that was put together that makes referencing any hit, win or seasonal occurrence available at your fingertips on your iPad. Pennant documents every game for pretty much any season in baseball's modern era and it does it in a very simple and easy to use interface.

You can see in this image above that I pulled up Game 6 of the 1986 World Series and I can jump to any inning to see who got a hit, made an error, or scored a run. As a blogger, this is a fantastic tool to reference memorable games and season stats. I think it will also be a nice argument settler when people's memories become fuzzy about what actually happened on what date.

The Pennant app is $4.99 in the iPad app store, so it's not your cheapest app, but it will be well worth it for any baseball enthusiast. For more details, read this write up on Pennant from Wired.com.
Posted by Unknown at 2:33 PM 1 comment:

...serious props to MetsPolice for posting this

One of my favorite movies of all time is The Shawshank Redemption. Been a while since I watched it, but as spring training begins one quote from that movie/book stands out. It's when Red says to Andy:


"Hope? Let me tell you something, my friend. Hope is a dangerous thing. Hope can drive a man insane. It’s got no use on the inside. You better get used to that idea."

I'm sick of hope. And this spring we find ourselves hoping for one of the worst things: that the Mets won't be as bad as we think they will be.

Now my morbid demeanor will soon fade away as I will be sucked into the glory that is spring baseball. I'll get excited to watch some of the young players make a name for themselves in St. Lucie. I'll remember what fun it was to watch Ike Davis early on last season and how surprising R.A. Dickey was.

I'll even convince myself that the Mets can be competitive. I will have hope.

But unlike Andy Dufresne from Shawshank, I don't have a secret escape hidden behind a poster of Rita Hayworth.

However, there's a second half to the quote that I mentioned above. It's Andy's response to Red's depressed response:


"Remember Red, hope is a good thing, maybe the best of things, and no good thing ever dies."

I hope that's true for Mets fans.
Posted by Unknown at 9:10 AM 3 comments:

Wright's message to Mets: 'Put up or shut up'

...looks like our young David Wright is starting to grow up.
...I like this attitude from the unofficial leader of the franchise and I love it even more when he says if the Mets have players on the team that don't believe they can compete that they should leave.
...between Madoff, management changes and the pure lack of any interesting moves this off season, I'm happy to hear actual baseball players talking baseball.
...the NY Post article is worth a read and it's the first time I've been somewhat interested in the upcoming spring training this year.
Wright's message to Mets: 'Put up or shut up' - NYPOST.com
Posted by Unknown at 12:19 PM 1 comment:

...clearly i need this. hat tip to Metsblog.com for the heads up.
NikeStore. Shop the Official Nike Store for Shoes, Clothing & Gear
Posted by Unknown at 5:22 PM 1 comment: