Give Me Some Opening Day

I tried to watch a Mets spring training game on Saturday afternoon, but I just couldn't do it. I don't care about these backups. I want to see Reyes, Wright and Bay out there every day.

I'm done with the speculation about Ollie P, Pelfrey and Maine. I want to see what they've got (or lack) in real game situations. I'm psyched about baseball being back. I have no high hopes for the Mets this season, but it's baseball and on opening day everybody is in first place.

I'm curious to see what Angel Pagan can do as a starting center fielder. I'm excited about Jason Bay because in MLB 2K10 on Xbox the guy is a monster at the plate. I want to see that Santana changeup. I want Mejia in the 8th (pretty please!). I'm looking for Frenchie to gun a guy down at the plate in the first week of the season. And I want to see Reyes dancing at the top step of the dugout after a David Wright home run (hopefully there's one before Memorial Day).

Baseball is the rare sport that is on almost every day for six months out of the year. My bracket is busted. 70 degree weather is on the horizon. Easter weekend is coming. It's time to start some baseball.

Ike Davis is currently on his way to minor league camp. You see when you bat nearly .500, come through in clutch situations and drive in more runs than the other two first baseman combined during spring training, you're bound to be sent to the minors.

Why the Mets feel so attached to Daniel Murphy is beyond me. They went out and got Mike Jacobs this offseason and it wasn't because Jacobs is a must have talent. They got Jacobs because they figured they needed another legitimate option at first if/when Murphy fell apart.

But now they have an exciting, young and energetic player in Ike Davis who has done nothing but prove himself this spring and he's rewarded by being sent back to the minors when he's potentially better than both the first baseman that will make the Mets roster.

What's the worst that could happen with Ike on the opening day roster? He fails and gets sent back to the minors. If he's a solid player, he'll be back up eventually. If he succeeds, you have just excited the Mets fan base and the organization.

In one of the more open and subtly angst filled interviews that David Wright has ever done, the Mets third baseman talks with Mike Lupica about the frustrations of the past season and his general distaste for ever having to experience that again.

Wright is quoted as saying that he "doesn't ever want to go through that again...We're coming back." I'm pleased to the leader of the Mets take a position like this. Coming from Wright, I don't think it's puffery or just a line you feed the press. I honestly believes he feels this way.

The tough part is Wright's not the problem. He has to rely on on the other players to hold up their end of things in order for the Mets to be successful. I'm confident Wright will be back to true form. It's everyone not named Santana that takes the mound that I'm concerned about.

It's good for the Mets, and their fans, to hear statements like this from our prize player. I just hope his words can impact some other arms and bats in the Mets clubhouse.
Posted by Unknown at 11:12 AM No comments:

Why the Mets Pitching is so Important

I love the long ball. I appreciate a good hit and run. And I jump off my couch like any fan when I see a shot hit to the gap in right center with runners on base. But winning baseball is all about pitching.

The Mets are living proof of this point. It may shock you to hear this, but the Mets last year were a pretty good offensive team statistically. Yes, I didn't believe it either. The Mets in 2009 were actually tied with the Dodgers for the best team batting average in the NL at .270. They also were ranked #2 for average with runners in scoring position.at .276. That means the Mets actually hit better with runners in scoring position.

On top of that the Mets led the league in stolen bases and were one of the top seven teams in runs scored. Now that resume would make you believe that was at least a .500 ball club if not in contention for the division.

But we know that's not the case. Why? Because the Mets pitching is awful.

This year's success is contingent on solid starting pitching. Bullpens will have their problems and I truly believe the K-Rod is a more than adequate closer to sure up the last inning. The 2009 Mets team ERA was 4.45 with an almost league worst WHIP of 1.45.

Any improvement in the starting rotation will yield at least 10 more wins than last season. While many of us, myself included at times, have been focused on improving the lineup's power the real key is improving the Mets' ability to get opponents out.

To me spring training doesn't give us a good sign of what's to come. In the spring pitchers are focused on control, learning new pitches and just getting in shape for the season. We have no idea what to expect from Maine, Pelfrey or Perez, but I'm no longer worried about what we'll get from Bay, Wright or Reyes this year.

If a lineup that included Cora, Pagan, Tatis and Santos for most of 2009 can be in the top portion of batting stats last year, it goes to show that in the National League pitching is all the difference.
Posted by Unknown at 8:39 AM 1 comment: 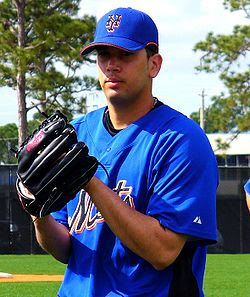 Johan Santana got hit pretty hard yesterday in a spring training game. He gave up four runs and had trouble with his control. Of course, he's Santana so we don't really think anything of it. I mean, come on, it's spring training.

However, the media and Mets fans are all over Oliver Perez. He got shellacked the other day for 5 runs in like 2 innings and the Daily News led with the headline "Ollie Oops!" I'm not trying to compare Perez to Santana because, let's be honest, there is no comparison. But we've got to cut Ollie just a little bit of slack.

This is spring training after all. I don't care if Perez goes 0-12 in spring training with a 6 ERA because if he wins double digit games in the regular season that's what matters. Perez got hit hard in his last spring outing, but I was happy to see him throwing strikes and cutting down on his walks.

Perez is a headcase. He's certifiably nuts. There is zero chance that anyone can accurately predict what is going on in that brain or how he'll do from one outing to the next. That's why I'm not going to even bother watching Perez pitch until April. I'll wait til the season begins to start casting judgment and calling for his head because that's when we need him to do something.

A no-hitter in spring training or an ERA under 2 mean jack squat in March.
Posted by Unknown at 1:12 PM 2 comments:

Our friends over at Hot Foot posted this first ever video blog post from Jeff Wilpon (wink). It's worth a look and the guy does a pretty good imitation of Mr. Wilpon as well.

Posted by Unknown at 3:43 PM No comments:

The Mets Can Compete for the NL East If...

Ron Darling was on WFAN this morning and predicted that the Mets will win "at best" 86 games this season. Not exactly the vote of confidence one would hope for, but at least Darling is a realist. It seems everyone who is an expert is predicting the Mets to finish the 2010 season with about 80 or so wins.

Well, let's look at the glass half full and see what it's going to take for the Mets to win the NL East: