There Will Be No False Hope this Mets Season

The issue for Mets fans the past few years has been the tease of hope amidst the reality of low expectations. A fast start last year turned into a painful collapse after the All Star Game and the questions of woulda/coulda/shoulda abounded within Mets fandom.

There will be none of that this year.

This April is proving to be a sign of things to come. The Mets have zero balance in their game. They get great pitching from their bullpen, and then the Mets go 0 for 16 with runners in scoring position. The Mets average 6+ runs per game, but their pitching gives up over 6 runs regularly.

Duda gets hot, but Ike is abysmal. Harvey is awesome, but Gee can't find the strike zone. Buck surprises everyone with an MVP-esque April, but the team is 4 games under .500 and falling.

Welcome to your 2013 Mets or better known as the lame duck Mets. Like a president who has lost reelection, Terry Collins finds himself mired in purgatory until the lauded 2014 season can begin with its promises of hope and success. If this were any other year, Collins would be gone by May. But the Mets won't make that move, which would be the right one along with dismissing Dan Warthen, because they are waiting to fully clean house in the off season with the hope of ramping up for a run in 2014.

Not to mention the fact that they're hosting the All Star Game in July and probably want no drama circling the team ahead of that media whirlwind.

So here's what Mets fans have to realize: the Mets are mailing in 2013. The players aren't, but the organization is. Try and sugar coat it if you like. No one will ever admit to this, but that's the truth.

This is a lame duck year. Kinda reminds me of the scenario in the movie Major League. It's not fun for the fans. It's not going to be fun for the players. But that's the reality.

It's gonna be a long season so find joy where you can in every Harvey start.
Posted by Unknown at 10:18 AM No comments:

Email ThisBlogThis!Share to TwitterShare to FacebookShare to Pinterest
Labels: 2013 mets

In the past week I've already lauded the mental toughness of Matt Harvey and ridiculed Dan Warthen's ability to fortify the psyche of his pitchers, but here I am again talking about the total lack of any semblance of mental strength in the Mets pitching staff.

Yesterday's double dip in Colorado was all the proof you needed. Dillon Gee started off the day showing no idea how to get his pitches across. You could tell it was one of those days where he didn't have his stuff and who could blame him with the temperature looming around the freezing mark and snow having just been blown off the field.

But here's where you can blame Gee: he failed to realize he didn't have his stuff and proceeded to throw pitches as if he did. Gee didn't just give up runs. He gave up bombs. There are two guys in the entire Rockies lineup that you don't want to pitch to, Tulo & Gonzalez. Just don't pitch to them! But Gee proceeded to throw meatballs to CarGo and he paid the price.

Gee wasn't THINKING. He was completely unable to identify his situation and find a way to work through it. Gee is on his way to having a Steve Trachsel type of year. He'll lose 10 games in the first half of the year before finally getting his act together in the second half to win a couple games in a row and make you think he's still a reasonable asset.

Game number one was nothing compared to game number two. A 6 run lead should be enough to win, but in the second game the mental misfits extended from not just pitchers but also to fielders. Baxter misplayed a ball that led to two runs. Lyons couldn't pickup the easiest of balls played to him which opened the door to a big inning. Parnell couldn't hold a runner on. Tejada pulled a Chuck Knoblauch and can't seem to throw the ball to first base.

The blame will go to Tejada who could have closed the door on the Rockies had he not thrown that ball away which led to the game being tied up. But before that even happened the Mets BLOWpen did the team no favors. Josh Edgin couldn't throw a strike. Hawkins likes to be hit hard. Lyons has evidently never fielded a ball before. And the list could go on.

I'm telling you that physical talent wise this team has enough assets to make things interesting. I'm not foolish to think they're a title contender but if you look at Murphy, Buck, Wright and the potential of Davis you have enough assets to be a competitor. Marry that with Harvey every fifth day and a solid season from Niese and you're easily a .500 team.

It's the mental side of things that will be the Mets downfall. Stupid mistakes that make you lose games to teams you should easily beat.

It's become a part of the Mets culture. Look at how many different names have been in the Mets bullpen in the last 5 years, but yet the product is still relatively the same. Sure you can blame part of that on talent acquisition but when you see no growth or change regardless of personnel, you have to start wondering if it's the leaders who aren't guiding the ship in the right direction.

Mental toughness. I'm telling you that's what makes or breaks this Mets team.
Posted by Unknown at 9:06 AM No comments:

Email ThisBlogThis!Share to TwitterShare to FacebookShare to Pinterest
Labels: blowpen 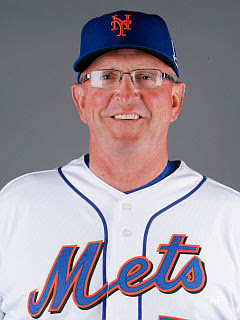 Look at the Mets pitching under Dan Warthen. Go ahead and sift through the stats, the records and the personnel. Talent wise the Mets pitching isn't great. Starting pitching has been better than relief pitching which has to do with the starters having a bit better personnel than the bullpen.

But if you forget about the names on the back of the uniforms and just look at the innings breakdown of the majority of Mets losses the last few seasons, you'll find a glaring commonality. They mostly contain one majorly bad inning.

Last night was just another round of this sick cycle carousel that has plagued Mets pitching. It doesn't matter if it was Dickey, Santana, Gee, or Hefner out there. They've all fell victim to "the big inning."

Psychologically "the big inning" is a heart breaker for any team. In the first inning when you're down more runs than innings left in the game, whether you want to admit it or not you feel like the game is lost. Go ahead and sort through all the Mets losses last year. The majority of them contained at least one inning in which 3+ runs were given up.

So why am I blaming Dan Warthen? I know he doens't throw the pitches but he's the one who's tasked with getting his pitchers game ready. He's the one who has to know the psyche of each starter and where are the signs that trouble is about to break loose. He's the one who needs to make sure mentally each arm in his staff is able to get out of trouble.

When hitters don't hit, the hitting coach goes. When teams don't win, the manager is fired. When pitchers consistently find themselves giving up 3 or 4 or 5 or 6 or 7 runs in a single inning, I'd say the pitching coach needs to be questioned.

Mental toughness is lacking in seemingly every pitcher not named Matt Harvey. From where I sit Dan Warthen has done very little to change the culture of the Mets pitchers and give them the tutoring they desperately need to avoid "the big inning."
Posted by Unknown at 10:56 AM No comments:

Matt Harvey and the Killer Instinct

Over the last decade, the Mets have had their chances at becoming a winning ball club. They had talent. They had pitching. They even had opportunities. But the thing that was missing most was the mental fortitude to get the job done.

Blowpens and bad hitting aside, there was an aura surrounding this team that they didn't have what it takes mentally to get the job done. Is this a measurable metric? No, but its evidence is everywhere. The Mets have started several seasons in really great fashion, but only to falter late. Early leads in games have given way to blown saves and an inability to hit late in games.

Hits and RBI with 2 outs and runners in scoring position used to be something the Mets thrived on in '06, but has since faded. Is the ability to hit, throw and field different in the first three innings of a game than the last? No, but mentally it is. That's why you see career 90% free throw shooters brick back to back foul shots in the final minute. It's why Tony Romo puts up ridiculous fantasy football numbers, but can't win a playoff game.

It's a lack of a killer instinct. But that trait that has been missing for some time is pretty evident in Matt Harvey.

His moxy, his presence and even his words in interviews prove he mentally has what it takes to face whatever barrier appear in his way and overcome it. His sampling is still small, but when he gets into jams he doesn't implode. He fights through it. He'll give up runs, but he won't give up a ton.

Think about RA Dickey the last few years. Tremendous pitcher and an incredible year last year, but we all know when he didn't have his knuckleball going, he was going to give up not 2 or 3 runs but more like 6 or 7.

Matt Harvey may have a bad day in his future, but I don't think it will be like that. To be cliche he has the heart of a champion. You can see it on the mound and it's why Mets fans are so enamored with him.

We've seen pitchers who can throw as hard as he does and who've had the early success he has. But we've never been as excited about Parnell or Gee or any other young pitcher with talents similar to Harvey.

It's his killer instinct that we can sense will eventually lead us to some much needed wins.
Posted by Unknown at 9:13 AM No comments: