This is such a great post that I'm devastated I didn't come up with it first. Over at Yardbarker, Justin Thomas has assembled his view of the best fictional baseball characters to appear on the silver screen into his own Dream Team.
I'm a little disappointed Pedro Cerrano didn't make the cut, but the list is pretty solid nonetheless. Take a look at the link below:
The ultimate baseball movie dream team
Posted by Unknown at 12:43 PM No comments:

HALLELUIA!!!! It's about time. All the details are on ESPN New York at the link below:
New York Mets to announce Citi Field dimension changes after World Series, source says - ESPN New York:
Posted by Unknown at 5:20 PM No comments:

Celebrate the 25th Anniversary of the '86 Mets 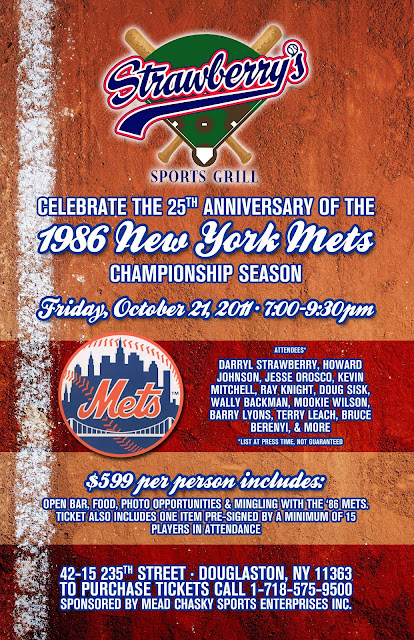 
$599 per person includes:
Open Bar, Food, Photo Opportunities and mingling with the 86 Mets purchase also includes: one (1) item that will be pre-signed by a minimum of 15 of the players in attendanceTo purchase tickets please call 718-575-9500
Posted by Unknown at 3:22 PM No comments:

Fact: David Wright is the Best 3rd Baseman in the NL

Here we go again with the trade David Wright talk. Oooh, the Rockies want him. Unless the words "Troy" and "Tulowitzki" are part of the conversation, I could care less. Stop the hysterics people. David Wright might just be the most undervalued player in the National League by his own fan base. No he is not Derek Jeter. He isn't Mike Piazza either. But he is the best 3rd baseman in the National League over the course of the last 5 seasons.

Take a look at this chart from FanGraphs.com which looks at 3rd basemen in the National League from 2007-2011.

Yes David Wright is ranked #1. No NL 3rd basemen has played more games, has a higher WAR or scored more runs than Mr. Wright. I'll also admit that he strikes out more than pretty much every other 3rd basemen, but his stats as a whole put him above Zimmerman, Chipper & Aramis Ramirez.

You might argue that the crop of NL 3rd basemen isn't very good. You might be right but all the more why are we trading the best option available? Do you honestly believe Daniel Murphy is a better option? Have you seen him play the infield?

These stats of Wright's include his head beaning season and his recent stint on the DL this past year. It includes him being protected by the likes of Delgado & Beltran, while also being an island unto himself the past three years.

If the Mets are going to get a stud starting pitcher like Clayton Kershaw, fine. Trade Wright. But if we're looking at a handful of maybe's, what if's and could be's, I say no thank you.

Can Wright be better than he has been the last few years? Absolutely. Does that mean he's not the best 3rd baseman available? No way.
Posted by Unknown at 2:01 PM No comments: