No Doubter from Davis for the W 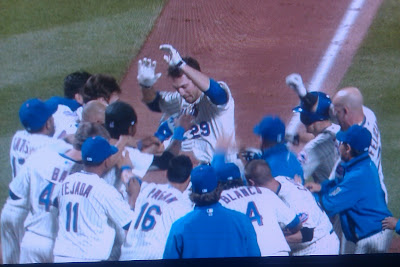 In the bottom of the 11th inning, there was no doubt the Mets were going to win this battle. Ike Davis demolished a fastball well into the second deck of the right field stands to cap off yet another heroic home victory.
I honestly thought Angel Pagan's triple just an inning earlier was going to end it, but Davis' shot was an absolute no doubter.

Mike Pelfrey made the rare feat of going 9 innings with no walks and no win to show for it. Pelfrey was on target tonight. He got into some trouble, but always seemed to find a way to get out of it. In a miracle to beat all miracles, Pray Rod pitched an uneventful 10th inning and looked like he had the most command that I've ever seen from him while in a Mets uniform.

This was a fun game to watch as Pelfrey was on his game and to see Reyes tie it up with a homer and then watch the team celebrate with Davis was just baseball at its best.

A win for Santana tomorrow is the only thing I can think of that would be better.
Posted by Unknown at 10:27 PM

K-Rod did not pitch an uneventful 9th if Mike Pelfrey pitched for 9 innings...

you would be correct. thanks for pointing that out. K Rod pitched the 10th.