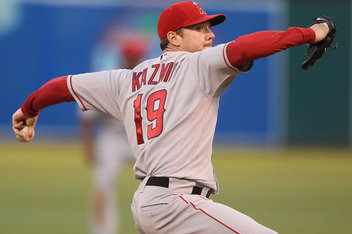 Spring training is underway. Pitchers and catchers across the country are stretching, squatting and dreaming about the season ahead.

So are baseball fans everywhere. Spring training is a fresh start for everyone. Expectations are high because we're still in the "what if" stage of our quasi-baseball reality. And Mets fans everywhere are enamored with one name: Zach Wheeler.

Is he or isn't he ready for the big leagues? Is he the most prized possession in the Mets franchise? Will he and Matt Harvey become our power pitching combo? Why can't he start in the big leagues this year? What's keeping the Mets from letting him loose?

All these questions and more will be bantered about over the next 45 days, but I am here to offer a simple warning. Like Jacob Marley I usher in the ghosts of seasons past to remind you to forget not Scott Kazmir.

If you ask a Mets fan what was the worst trade the Mets have made in the last 20 years, I guarantee you the Scott Kazmir for Victor Zambrano trade will be mentioned 99% of the time. It was an idiotic decision made with little statistical knowledge. The Mets gave up a potential franchise player for roll of the dice to make the playoffs which was pretty much already out of reach.

Idiotic. Insane. Juvenile. Many more adjectives can be used for that trade and that is why we can't possibly imagine the Mets being dumb enough to make this kind of mistake again with the likes of Zach Wheeler. Right?

Before we get all bent out of shape about Wheeler, let's remember who Scott Kazmir really turned out to be. He turned out to be a middle of the road pitcher. Sure he had double digit win seasons for 4 straight years. He even made an All Star Game or two. But his career numbers are not that of an anointed one.

Kazmir's lifetime ERA is 4.17. His winning percentage is .520. And after 2009 his stock has dropped significantly as he's struggled to regain his control. What was once a prized possession in the end turned out to be less valuable than originally thought. Such is the life of a pitcher. They're unpredictable and the smallest thing can cause them massive problems. Just ask Rick Ankiel.

So what is the point of this? Were the Mets dumb to trade Kazmir? Yes, they were dumb to trade him for Victor Zambrano. Had they traded  him for someone younger and with as much promise? Then that might be a different story.

What I hope the Mets realize is that they have an extremely valuable commodity in Wheeler...for right now. Once he gets to the big leagues the talk about his velocity, control and potential will go out the window because people can actually see how he performs. The Mets had the same thing in Lastings Milledge and Fernando Martinez. Two guys with ridiculous upside, but their stock plummeted once they made it to the majors.

I can't say whether the same thing will happen with Wheeler or not. I hope he becomes the greatest Mets pitcher to ever take the mound, but let's not think that is what's actually going to happen.

The Mets have to consider his value at this point in time and what it can potentially get them in return. Baseball is a game full of risks, but I think we've seen enough minor league talent turn into busts that we should know better than anointing someone as being untouchable before they make their first start.

That being said, I'm pulling for you, Zach Wheeler.
Posted by Unknown at 11:25 AM No comments: