Can the Mets Walk the Walk? Talking is easy. Just look at Ochocinco & TO. They run their mouths like there's no tomorrow, but when it comes to backing up that talk on the field...well that's a different story.

The Mets are saying all the right things and frankly we should expect them to. Terry Collins is fired up. David Wright is showing frustration and a resolve to win. Any player who is interviewed is talking about how the Mets are better than people give them credit for.

The problem is talk is cheap. It's not until April rolls around and the games are played that we find out whether it's hot air or some substance behind these words. The Mets have to know that they need a huge April in order to keep the fan base interested and the seats at Citi Field occupied past May.

I don't mind the confidence talk, but what I would rather hear about is how has Murphy improved at second base? What are the chances that Lucas Duda can hit consistently? What on earth is happening in center field this season? Is Johan Santana going to be Johan Santana? Has Pelfrey seen a shrink?

Those are the conversations I want to hear and I'm sure by the time St. Patrick's Day rolls around I'll have a new set of questions I need answers to.

Honestly, I think the Mets will be better offensively than the critics think. With the fences adjusted, there's the potential that Wright, Bay, Davis, Duda and Murphy can all hit in the 15-20 home run range which would be a home run total not seen in Queens since the days of Strawberry and McReynolds.

The big question will be pitching. And we all know pitching has been the Mets doom for the better part of a decade. BLOWpen, fragmented starting rotation, neurotic pitchers and injuries have plagued the Mets and there's little hope for improvement this year.

But for now the talk of hope and "we shall overcome" rules the airwaves. Reality won't settle in until the end of March. For now we live in the dream that the talk coming from the New York Mets can be backed up by their play on the field. Sweet dreams.
Posted by Unknown at 9:29 AM 2 comments:

Gary Carter: Growing Up with The Kid 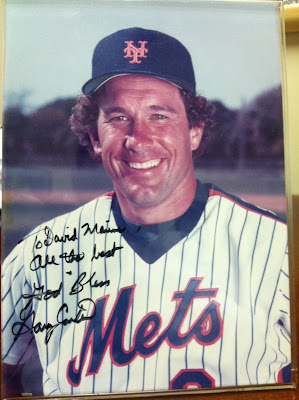 My first jersey, my first autograph and my first memory of a clutch baseball moment all belong to Gary Carter. "The Kid" was a monumental baseball figure for me growing up. In 1985 I saw him come to the Mets and turn a really good team into champions. He didn't do it alone but he was the last piece that allowed the amazing puzzle that was the '86 Mets to be put together.

I remember Carter always being in the top 10 in the National League in the long lost stat "game winning hits" that was popular in the '80s. I can still see his home run over the Green Monster in the '86 series. Somewhere in my parent's basement there's probably the banner that I made when we went to see a Mets game hoping it would be the one where Gary Carter hit his 300th home run.

While the baseball memories and winning seasons that Carter played a role in for me as a young Mets fan, it was the type of man that he was that will make a longer lasting impact. As most kids who grew up in the '80s playing baseball I had my list of favorite players. Gooden and Strawberry were right at the top. But what I couldn't understand as an 8 year old is why Gooden and Strawberry were missing games? Why were they being talked about potentially being put in jail? Why would great ballplayers do such stupid things? Why did the players I had hanging up in posters all over my room have to be such disappointments in real life?

Looking back those questions are juvenile now, but baffling for someone in elementary school. But there was one player who would not disappoint. I still have a copy of Sports Illustrated from 1987 where they dedicated an issue just to baseball and taking a look into the lives of some of the top players. Gary Carter was featured with his family making pancakes on a Saturday morning.

In today's era we love to laud the anti-hero. The bad guys have somehow become more likable or more interesting than the good guys. However, this is just a fad and the one thing that can remain constant is the good guys come out on top in the long run. Gary Carter wasn't just one of the good guys. He was one of the greats, both on the field and off.

Sure the likes of Barry Bonds, Ty Cobb and Babe Ruth will be remembered for their baseball talents, but Gary Carter will have greater rewards beyond just baseball royalty. He's a hall of famer. He's a legendary Mets player. And he was a man who never wavered, never crumbled under the spotlight and never had his faith questioned.

The picture you see in this post has been in my possession for 26 years. I never got to meet Gary Carter, but I went to elementary school with a girl, Leanna Roche, who's father did. When Mr. Roche was golfing with Gary Carter at an outing, he mentioned to him that there was this young boy that rode to school with his daughter that was a huge Mets fan. In fact, this little boy wore #8 on his tee ball uniform. Instead of just signing his name, Gary Carter wrote mine first and then added a short note before leaving his autograph.

I have a few dozen autographs in my possession of baseball players I've looked up to. But Gary Carter is the first one I ever received and the only one who gave more than just his name.

The world lost a great catcher but a better man. May he be remembered more for the latter.
Posted by Unknown at 9:04 AM No comments:

...good post from Ken Rosenthal of Fox Sports.
...it's time that someone call out Selig for letting things slide while other teams in lesser cities would have been dealt with already. I don't think any Mets fan worth their salt would be sad to see the Wilpons go.
...it's a shame that it has to come to this.
New York Mets get hands-off treatment from MLB commissioner Bud Selig - MLB News | FOX Sports on MSN:
Posted by Unknown at 2:37 PM No comments:

What David Wright Can Learn from Eli Manning

But if you look back at Manning's career, he and David Wright were on the same path. Here are the similarities:


There are more similarities than just this short list, but it's the difference in Manning that make comparing them such a stark contrast. The struggles that Wright & Manning both faced have been overcome by Manning. That's not to say Eli did it all himself, but it's hard to argue that he is not the driving force behind the Giants.

When times became tough, when players left for greener pastures, when he was surrounded with less than superior talent, Eli Manning was able to rise to the occasion. When the game is on the line, Eli doesn't crumble under the pressure. He treats a 2-minute drive in the 4th quarter with the same attitude as he does the opening kickoff. When it comes right down to it, Eli Manning does not allow circumstances to impact his performance.

Wright has struggled the past few seasons as he's been left exposed in the lineup. Trying to take on the leadership role in the clubhouse has put a significant burden on him that appears he is unable to handle on his own. When is the last time you remember David Wright coming through in the clutch?

Eli Manning has been called the "baby face assassin" and Wright needs to earn that moniker as well. It's time for Wright to grow into a ballplayer who isn't swayed by his surroundings. I'm not asking him to become something he's not. I'm asking him to develop a killer instinct that is needed to be a superior player in any sport and survive the New York sports media onslaught.

For David Wright, this is the season to prove it. There are zero expectations for the 2012 Mets just as there were for the Giants this past season. That's not to say I expect an improbably championship run from the Metropolitans, but I do expect some growth from Wright.

If there is none, than we are well within our rights to question the relevance of Wright.
Posted by Unknown at 12:23 PM No comments: