Spring training was at one time a season of hope, joy and wonder. Those days are gone and have been replaced with discouragement, agida, and disbelief.

The last two seasons the Mets had made off season moves that gave Mets fans some hope for the coming year. The 2010 season lacks the silver lining that we had been fooled with in prior years. With pitchers and catchers reporting in just a few weeks, I personally have no excitement about the season to come.

The issues the Mets needed to deal with are still unresolved. The Mets enter 2010 with the exact same starting rotation as they did last year which delivered them a next to last place finish. Sure the Mets added a solid bat in Jason Bay, but now have an injured Carlos Beltran, a question mark at first base and a reliance on bounce back years from their star players in Wright and Reyes.

The free agents the Mets were supposedly targeting, whether you liked them or not, have been picked off by other contenders. Molina, Piniero, Halladay, Sheets, Garland, Figgins, and a laundry list of other players the Mets allegedly were focusing on are gone.

What is there to look forward to?

I love baseball. I'm a die hard Mets fan so I will be begrudgingly sucked into every Mets game, but I've lost any hope that this team can and will succeed in 2010.

The Mets are reliving their past. This team reeks of the 2003 or 1994 teams that relied on mid-level moves and the promise of player improvement to lead to success but ends up falling well short of any worthwhile goal.

If we don't pay attention to history, we're bound to repeat it. That's what some smart person said a while ago and has been repeated to us hundreds of times in our lives. But now is the first time that I finally realize what it means.

According to Newsday's Ken Davidoff, the Mets main targets are Ben Sheets and John Smoltz.

No, I say. Stay away from Smoltz. Have we learned nothing from the Tom Glavine experiment? Or Julio Franco? All Braves players from the late 90's to early 2000's are pure Kryptonite. They're a plague. A curse. A voodoo spell on New York baseball. Nothing good can come from having them on the Mets.

Ignore my paranoia and just look at Smoltz's numbers since leaving the Braves. They're atrocious.His spell with Red Sox fell flat and his minimal time with the Cardinals was beyond disappointing.

Plus Smoltz is getting up there in age and is more prone to injury than what he once was. I don't see any value in adding Smoltz to the back of the bullpen. But that obviously doesn't sway the brilliant minds in the Mets front office.
Posted by Unknown at 9:00 AM 1 comment:

Hernandez's # - To Retire, or Not to Retire? 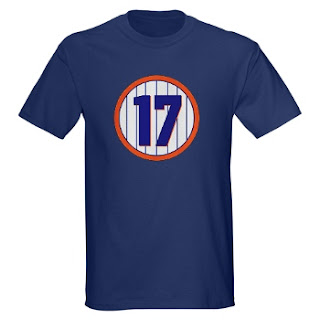 It seems like every month there is a debate about whether or not the Mets should retire Keith Hernandez's number. Turn on Francessa on a slow sports day, and you might hear a heated discussion about Mex's merits. Check out Metsblog, and you'll find some very opinionated fans who according to the poll, overwhelmingly believe (84%) that #17 should hang on the outfield wall at Citi Field.

FROM SheaHeyKid24: Look, Keith was a very good player and influential leader, but I think those voting “yes” are in the “lets retire more numbers cuz our wall is empty” corner.

Surely, Mets fans are smarter than this, no SheaHey?

Really? All of the other players like Rafael Santanna? Come on dude, you're killing me with that one.

FROM kjclinks: If Ozzie Smith is in soley for his defense (and no one questions him at all); then Keith should be considered for a little bit of everything.

This is a great point and probably one of the best arguments for Keith getting into the HoF. Nice job kjclinks.

FROM mets9268: Keith was a game changer.

I like that one. Game changer. No question Keith was a game changer for the Mets. Just think about what that team was like before he arrived. They had nothing going on and were an embarrasment. In fact, Hernandez himself said he did not want to go to New York because they were plain awful. Yet, his presence in the clubhouse not too mention his tenacity helped give the Mets a new identity. And let's not forget that he was arguably the best clutch hitter this team has ever had. I say you have to retire his number. He was an awesome player and I wish we had someone remotely resembling him on the current roster.

You can get Keith's retired numbered shirts here at www.theprintmen.com

For a great take on Hernandez and what he meant to the Blue and Orange, check out Ed Leyro's fantastic post on Mets Merized Online.
Posted by bryan at 8:24 PM 1 comment: I wholeheartedly agree with Hot Foot's position, but I'm doubtful that the Mets will actually make the right move.
Posted by Unknown at 11:40 AM No comments:

Mets Lifer is now on your iPhone 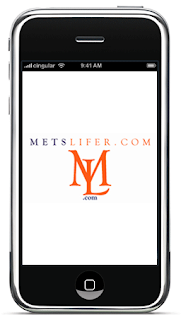 There's an app for pretty much anything these days, but now there's finally a Mets Lifer iphone app.

Early reviews are still coming in, but it appears Carlos Beltran's doctors in Colorado recommend it for all those athletes seeking secretive surgeries.

You can get the Mets Lifer iPhone app by searching for "Mets Lifer" in the iTunes App Store and you can download it directly here.
Posted by Unknown at 12:40 PM 1 comment:

With Roy Halladay having a cheesesteak in Philly, John Lackey downing some chowder in Boston, and pretty much every other reasonable #2 starter nestled at home for the rest of the winter, the Mets find themselves playing a game of chance.

There's no sure deal out there to improve their starting rotation. There's only varying levels of risk. So the question is how much are the Mets wiling to risk when it comes to starting pitching next year? Let's look at the options:

Risky: Joel Piniero, Jon Garland, or Doug Davis
These are the free agent pitchers that appear to be on the Mets radar. None of them are a solid #2 option. All of them appear to be asking for too high of an asking price. And each of them have the potential to be the worst signing of the offseason. However, there's the chance that one of them will step up to perform above expectations, although I find that doubtful.

Riskier: Ben Sheets or Pedro Martinez
After a year of non-stop injuries are the Mets willing to take a chance on one guy who hasn't pitched in over a year or another guy who may have peaked last season? Neither of these pitchers appear to be on the Mets wish list, but there could come a time when the Mets might be desperate enough to start calling their agents.

Riskiest: Oliver Perez, John Maine and Mike Pelfrey
The riskiest option of all is for the Mets to go back with the exact same rotation they had in 2009 and pray that at least one of these guys can turn their career around. While there's no additional monetary risk in this option, the odds aren't worse here than the Lions making the playoffs next year.

Of all these options, I'd be more inclined to take a shot at Ben Sheets, but not at his current asking price which is about $12 million a season. That's just ridiculous, but Mr. Sheets may feel like negotiating as January turns to February and he's still unemployed. Sheets will only look for a year deal so there's no long term investment risk there as opposed to Piniero/Garland/Davis who are probably seeking multi-year deals.

I'd also be open to trying out Bronson Arroyo if the Mets can some how convince the Reds to take Luis Castillo or Oliver Perez off their hands, but that seems less likely as the off season wears on.

While standing pat may be the riskiest of all options, the last thing I want is for the Mets to sign a long term, overprice contract to a guy who's not a proven #2 starter. Just look at Oliver Perez if you don't know what I mean.
Posted by Unknown at 4:18 PM No comments: