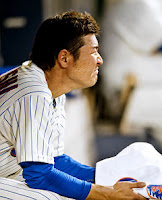 I know the blogosphere will be a buzz today about the Mets lack of clutch in late innings. Everyone will want to focus on David Wright's inability to get the big hit against a left-handed pitcher in the 7th inning with one out and the bases loaded. And ultimately the Mets were not able to recover after that.

Even though the Mets lost yesterday, it's yet another series win against a team with a winning record. Series wins are the answer to a 162 game season. The more series wins you can pile up the better the position you'll be in for a playoff run.

I'd like the Mets to win every game, but I realize that's not going to happen. Sure the Mets lost, but they showed the ability to recover after a poor pitching performance by Takahashi and that they can get hits with 2 outs to try and mount a rally.

The Tigers are decent, but the Twins are good as they come rolling into town tonight. If the Mets can get yet another series win against an American League opponent, they will have one of the best records for interleague play in all of baseball.

Bring on Mauer, Morneau and any other Minnesota/Canadian grown talent they can throw at us. Let's go Mets!
Posted by Unknown at 8:42 AM