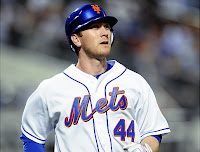 Call him Jack Shephard. Call him Hurley. Call him Sawyer, Freckles, Locke, Jin , Henry Gale or Desmond for all I care. It all leads to the same conclusion. Jason Bay is utterly lost.

Bay is causing Mets fans to flashback to the first year Beltran joined the ballclub. Big paycheck coming off a huge season, only to struggle for 6 months in New York. Flashforward to 2010 and Jason Bay is doomed to repeat history.

The big power bat signing of the offseason has fewer home runs than a rookie first baseman who didn't even play for most of April. His bat is no longer a threat and it leaves those batting in front of him unprotected. It's not even that Bay has had a tough stretch or that he's hitting the ball well but getting out. Bay just looks completely baffled at the plate for the better part of the last three months.

I was one who thought it was just a funk that Bay would find his way out of, but it seems less likely that Bay is going to come anywhere close to the 30 home run, 100 RBI player that we all thought he would be.

There may come a time when Angel Pagan and Jeff Francoeur may look like the better options to play in left.
Posted by Unknown at 11:12 AM