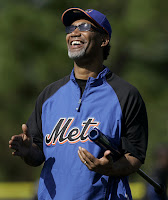 It's the second game of the year. The season is barely a few days old, but Mets manager Jerry Manuel has found a way to already start talking stupid.

Following yesterday's tough loss to the Marlins, our beloved manager made a remark that he has some concerns about the starting rotation.

Ya think? Umm, Jerry? Shouldn't you have expressed this back in like December when something could have been done about it? Did you talk to Omar Minaya at all these past 6 months? What the heck?

This is possibly the most idiotic thing Manuel has ever said. Even though it's the truth and no one can deny that there aren't problems with the Mets starting pitching, you don't say something like this after the second game of the season when you had an opportunity to do something about it just a few weeks before.

The crazy part is it was after a great game in which the Mets overcame a 5 run deficit to send the game into extra innings. We saw more production in the first two games of 2010 than we did in the last two week of the 2009 season.

And such is life with the Mets. Manuel can't leave town fast enough for my taste.
Posted by Unknown at 12:19 PM