The Unlikeliest of Wins 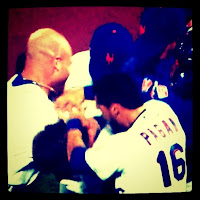 You can't say the Mets aren't an interesting team to watch. On any given night you can see massive leads blow, comebacks fall short and potentially a life threatening injury unfold on your television.

But last night's 9-8 win was one of the unlikeliest of comebacks. After giving Mike Pelfrey a 4-1 lead behind three home runs, Pelf once again settled into his routine of giving up smash hit after smash hit to see the lead become a tie game.

And then comes Igarashi. Does this guy ever do anything but give up runs? A 4-4 game became 8-4 in the span of 5 minutes. So here comes the unlikely part. The Mets came back...to win! Yes! No comeback only to blow it in the 9th. They actually won! I know, it's crazy.

The craziest part is that they scored 3 runs in the bottom of the 9th against possibly the best closer in the National League, Heath Bell, who is also historically a Mets killer. Ever since he was traded, he lives to destroy the Mets.

But the Mets somehow prevailed with a Jason Pridie leadoff single. A Justin Turner single. A David Wright single. A wild pitch. And then Lucas Duda with a seeing eye single to clinch it.

Sure it's just the Padres but that's a game the Mets should have lost. You gotta say that this team never seems to give up. I like that.
Posted by Unknown at 8:34 AM