Omar Burning Up the Hot Stove 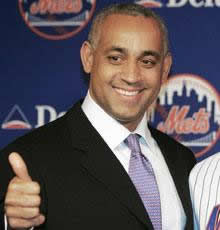 I don't know about you Mets Lifers but I'm sure getting fired up for the 2010 season. With the recent signings of Alex Cora, Chris Coste and Heny Blanco, Omar Minaya is proving his mettle yet again as a brilliant GM. How did he ever pry Chris "I'm Still a Phillie" Coste away from Philadelphia? Stroke of genius that's how. And just in case us Met fans weren't satisfied with one back up catcher, he got us another one just a day later in Blanco. Woah! Two backup cathers in two days! I can't believe it! I hear he's even thinking about signing another cather to play full time. Imagine that? Three catchers in one off season to go along with the two we already have? Just awesome! Minaya is on such a hot streak he better try his hand at the tables in Vegas.

He is just burning up the hot stove! So much so that I'm already forgetting about 2009...and 2008...and 2007. That's what I'm talking about. All you knuckleheads who are criticizing our great GM and this awesome ownership should just go shut your pie holes. In case all of you forgot, Jeff and Omar promised us they will be 100% committed to putting a a championship caliber team on the field for 2010 and boys and girls, I gotta tell ya, they are putting their money where their mouth is.

Fired up I'm tellin ya!

Who needs Roy Halladay when we got John Maine and Oliver Perez? Come on Mets fans, wake up! Roy Halladay....he's like 45 years old now. Washed up I tell ya! And you just wait, just wait, because I know Omar has another swift trick up his sleeve. That mad magician is going to bring us Joel Pinero. And when he does, I'm serious, I'll just explode with excitement. I'll probably pee in my pants. Where are those season tickets? Sign me up! Joel Freakin' Pinero - I'd like to see the Yankees top that signing. All those titles, the mega-star players, the money...Puh-lease people. The Yankees? Come on, we are the freakin' NY Mets of Flushing! The Steinbrenners? Shoot....We got the Wilpons and all that cash from the billions of billboards and ads at Citi Field. Man, I'm feeling it...we are just killing the Yankees next season and anyone else who comes into our parameters. You wait and see.

Believe? You bet'chya. We are taking it next season....and Omar needs another extension right now. Right now I'm telling you.
Posted by bryan at 9:59 PM

About Joel Pineiro: "I'll pee my pants" possibly the best line ever.

We certainly are going to take it next season. Or should I say get taken...behind the woodshed.