Jerry Manuel Has Lost His Mind 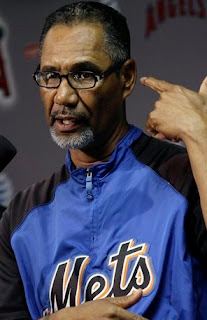 Ah, Jerry. He's always good for a fun line or two during an interview. But this afternoon, he showed just how far off the deep end he's gone.

While on Sirius Radio's MLB Home Plate show earlier today Manuel said that people should consider Mike Pelfrey as the number 2 pitcher in the Mets rotation.

Perhaps by process of elimination, but I would argue that Elmer Dessens might even give him a run for his money there. Are you kidding me? Is this a statement to make Mets management realize the plight of this team or has Manuel just lost his marbles.

Manuel went on to say that this is a big year for Pelfrey if he wants to considered in the same class as Justin Verlander. Verlander? Verlander? Pelfrey wishes.

Omar, this should be an eye opener for you. Mike Pelfrey is your number two starter. He's your best pitcher after Johan Santana. Quit all this catcher talk and Corey Hart nonsense and go get a good (not Piniero) starting pitcher.
Posted by Unknown at 7:29 PM