Manuel is a Funny Guy 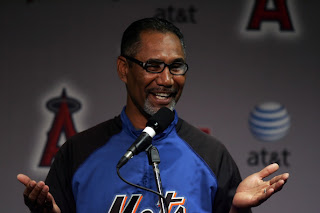 There’s no evidence Jerry Manuel was chillin’ like a villin’ (as Manuel definitely would say) with Michael Phelps last month. There is no infamous photographic of the charismatic Mets manager dubiously inhaling from a cylinder. No, Manuel is just plain ‘ole funny. He’s a natural. His press conferences last year were must see TV as his biting sense of humor always made everyone laugh. He was the polar opposite of the moody, sensitive Willie Randolph.

So was it any surprise yesterday, on his first full day as manager in Mets camp that he opened up with some of his funniest comments ever?

Read the following quote from Manuel yesterday and you’ll see what I mean.

“If we could lead [Castillo] off, which is probably best for him, it might be something we have to do . . . because we have to give him the best possible chances for success in order for us to get [last] year behind him."

Hysterical, absolutely hysterical. That Manuel, he’s a real Barney Rubble. Of course, the kicker in this, the real knee-slapper here is that Jose Reyes will bat third. Third! I mean, we all knew Manuel was witty, but this is pure comedic genius. Chris Rock, look out!

Sit back and take a moment to think how funny this really is and you realize the joke is one for the ages. Manuel, with that charming smile of his, throws us a jab by telling us he’s going to move the best leadoff hitter in the game to the third spot – which is funny enough – but then his knockout blow comes when he tells us he’s replacing him with the worst hitter on the team. Bamn! And we’re down for the count…stomach muscles are hurting; peeing in our pants, laugh out loud funny.

Jerry Manuel, I love you man. You really brought you’re “A” game yesterday. Next thing you’re going to tell us is that Carlos Delgado will be batting eighth…you know…for that second cleanup spot in the lineup.
Posted by bryan at 11:35 AM